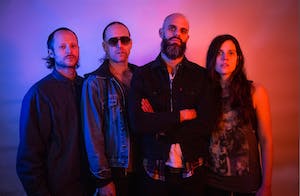 Baroness formed in 2003, slugging it out in their local Savannah, Georgia scene while adhering to a DIY punk ethic, booking their own tours and silk-screening their own shirts. In 2007, they put out their critically acclaimed debut, the sludgy, guitar-banging Red Album, which heavy-metal magazine Revolver named Album of the Year. They followed it up two years later with the heavier Blue Record, extreme-metal magazine Decibel’s Album of the Year. But it was on their last release, the 2012 double-album Yellow & Green, where they really opened up, exploring a slightly lighter touch with more accessible vocals and alt-rock arrangements, leading to a Top 30 chart debut in the U.S. and Spin declaring it the “Metal Album of the Year.” Unfortunately, the group would not be fully able to enjoy Yellow & Green’s success and accolades.

In August 2012, less than a month after Yellow & Green came out, Baroness were on tour driving in England when their bus broke through a guardrail on a viaduct near Bath and plummeted nearly 30 feet to the ground below. Through some miracle, none of the nine passengers died, though Baizley broke his left arm and left leg and the group’s rhythm section at the time, bassist Matt Maggioni and Allen Blickle, both suffered fractured vertebrae.

Baizley spent two-and-a-half weeks immobile in a hospital and then months to recover from his injuries, but when he did, he and guitarist Pete Adams decided to keep the group going. “I spoke to James Hetfield, who has also dealt with the fallout from a bus-related accident, and he said, “Life is going to be difficult for a while; but you’ll be fine. You’ve got this,'” he says. “And once I had done some physical therapy and played guitar again, I thought, ‘Yes, I’ve got this. It’s not over.'”

The band went through a transitional period with Maggioni and Bickle amicably departing the band. They soon found a new rhythm section in and drummer Sebastian Thomson and bassist Nick Jost. With a new lineup in place, the group embarked on lengthy trek that Baizley describes as a “thank you tour,” to the fans who stood by the band in its darkest hour, in the spring of 2013. Other than a handful of Australian gigs in 2014, Baroness spent the time since then getting ready for their next chapter, setting up their own indie label, Abraxan Hymns, and writing songs for their next album, Purple.

“I wanted to celebrate my misery through my creativity and face it head on,” Baizley says of the LP. “The lyrics on Purple are about the different paths that formed in the fallout of the crash, from very direct stories about difficult moments of suffering to the love I feel for people who were there for me.”

When the group finally got to work out the tunes in the studio, they did so with a producer whom Baizley has always been eager to work with: Dave Fridmann. “He’s been on the top of my list since Day One,” the singer says. “I never thought he’d work with us. I absolutely worship his recordings.” With 25 years of experience mapping out Wayne Coyne’s intricate flights of audial fancy on Flaming Lips records and making the most of bands generally known for understatement like Low and Spoon, the producer helped the group construct a sonic habitat for all of Purple’s unique sounds, including acoustic guitar, otherworldly keyboard and echoes galore. He also helped them make the most of themselves.

Purple was released on December 18th, 2015 to universal acclaim, with Rolling Stone proclaiming it “a ferociously cathartic and brilliantly crafted blast of progressive metal.” Entertainment Weekly called Baroness “one of the best pure rock acts on the planet,” while Revolver said that Purple “is the triumph over the adversity the rockers have dealt with in recent years, and it sounds absolutely stunning.” LA Weekly called Purple “the finest release of their already impressive discography.”

The band followed up Purple by touring constantly through 2016, trekking through North America, the UK, Europe, Australia and New Zealand, making their first stops in Mexico and Columbia along the way. In June of 2017, Baroness announced that longtime guitarist Pete Adams had decided to step down from the band to focus his energy on matters closer to home. For his replacement, the group recruited Philadelphia based guitarist Gina Gleason, who made her official live debut at a hometown show in the storied Union Transfer venue before embarking on their Summer European tour.

As the close of 2017 finds Baroness entering a new chapter in their story, the band will be making select festival appearances while writing songs for their next album.