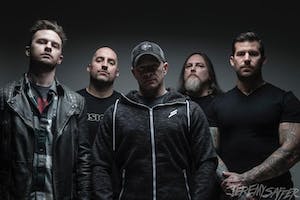 About All That Remains

If you want to leave a lasting impression, get to the point...

“We just try to trim away all of the fat,” exclaims Labonte. “It’s easy for metal bands, ourselves included, to get self-indulgent and write parts for the sake of parts. Unless an idea makes a song better, there’s no reason to put it in. We always put the song first. That’s how you stick with people. If you just write good songs, everything else will be okay.”

That philosophy cemented the Massachusetts group as one of this century’s most con- sistent purveyors of heavy music with a bulletproof canon of arena-worthy anthems. All That Remains’ discography is highlighted by Top 10 Active Rock radio hits such as their first number one “Stand Up,” “Two Weeks,” “What If I Was Nothing,” and more. Averaging 1 million monthly listeners on Spotify (an unprecedented feat for a metal band in any era), cumulative sales eclipse 1 million albums worldwide. Not to men- tion, they’ve earned five consecutive Top 10 debuts on the Billboard Top Rock Albums Chart and four in the Top 5. Most recently, 2017’s Madness spawned the smash cover of Garth Brooks’ “The Thunder Rolls,” which trended on VEVO and generated 21 mil- lion plus total views and 8 million Spotify streams in under a year’s time. In addition to packing houses as a headliner, they’ve practically burned down the stage every- where from Rock on the Range to Welcome to Rockville.

When it came time to commence writing for what would become Victim of the New Disease, the boys decided to go back to square one. All That Remains holed up in the Chicopee, MA rehearsal space they’ve occupied since 2010 and dove into writing alongside an old friend producer Dan “DL” Laskiewicz [Unearth, The Acacia Strain].

“We were trying to focus on what we do best,” the frontman continues. “We wanted to be heavy. We didn’t want to go to L.A. and work on a record out there again like we did with Madness. We wanted to do it where we were comfortable at home. That method has always done really well for us. We got together in the old practice space and hammered out riffs, ideas, and songs that resonated with us.”

For the first time, the band recorded proper demos complete with music and lyrics, marking “the most striking difference” between previous releases. With “DL” behind the board as producer and mixing courtesy of Josh Wilbur [Lamb of God, Gojira], they delivered a striking, succinct, and sharp collection of ten anthems.

“We decided to throw a curveball,” grins Labonte. “...And do the the heaviest record since For We Are Many in 2010! It was the perfect way to follow-up Madness where we did some different styles and songs and even covered a country song. People might’ve expected something more experimental, but throwing curveballs is what we do.”

All That Remains kick down the door on Victim of the New Disease with the deadly barrage of opener “Fuck Love.” Chainsaw-sharp riffing and guttural growls roared as the musicians make good on this heavy promise.

“We’ve started a few records with something that really kicks hard,” he goes on. “You take your heaviest song and say, ‘This is how we’re going to set the tone for the rest of the album. Here you go.’ ‘Fuck Love’ is the most aggressive song we’ve done in a while. It’s burner. We dig beginning with a shocker.”

“If we get a good hook, we like to make sure it’s maximally exposed,” says the singer. “We want something you’ll hum later with lyrics you might be able to relate to. How- ever, for the first time, we got to leave the double bass in!”

Then, there’s “Just Tell Me” [feat. Danny Worsnop]. On the hypnotic anthem, Labonte locks into an unbreakable harmony with Worsnop, adding another dimension to the record.

“We’ve been friends with Danny for a long time,” he continues. “We loved what he did. He wanted to do something more chill, and I think he hit a homerun. If you’re into rock ballad songs, you’ll appreciate it.”

Everything culminated on the visceral and vital “Victim of the New Disease,” which hints at “how some ideas don’t work out—and continue not to work out, but we keep trying them” over a fiery and focused four-on-the-floor riff.

In the end, All That Remains uncompromisingly tread the same path they’ve trodden for nearly two decades and delivered a definitive body of work on the way

“This band is my life,” Labonte leaves off. “It’s twenty years of being a musician. We’ve been able to weather some storms in the music industry, survive, and come out thriving. We didn’t just ride a trend; we built a real career out of writing songs. We don’t have a look or a gimmick. We have five dudes who write songs.” — Rick Florino, September 2018