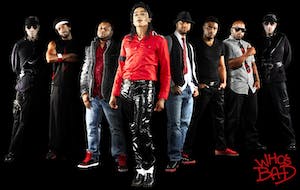 Malcolm Little has been entertaining since the age of 7, imitating his hero Michael Jackson. Born in the Bronx, raised in Piscataway, NJ. From 2005 to 2015 he pursued a career in dance, to this day he still travels to perform.

Malcolm's most fufilling moment was in 2011 when he was chosen to be apart of America's Best Dance Crew top 4 team, Rhythm City. From 2011 to 2015 he has been able to perform and teach with Rhythm City across the country as well as several tours throughout Asia.

In 2015 Malcolm was asked to be a part of Who's Bad The Ultimate Michael Jackson Experience, which is where you can see him performing currently. They tour all throughout the country and Malcolm has been able to see even more parts of the world i.e Brazil, Peru, Abu Dhabi, & Hawaii.

Throughout his journey with Rhythm City, he has found a love for fitness and is currently a group fitness instructor for the Max Challenge.

Malcolm's dream is to just inspire others to spread love and joy through their craft and remember that you are only limited by the barriers you create in your mind. Break the rules and create the life you want to live!

Frank Abraham began playing bass at the age of 13. Only two years later, he won a coveted position in the Symphony Orchestra at the esteemed Hamilton High School Academy of Music. In 10th grade, Frank was admitted into the Jazz Band at Hamilton High School and his talent secured him a full tuition scholarship to the prestigious Berklee College of Music in Boston. At Berklee, he focused on Jazz studies and became adept in many more styles of music including R&B, Rock, Hip-Hop, and World-Music. In 2006, Frank co-founded J4DA, a Jazz Hip-Hop and World-Music. In 2008, Frank returned to LA and has since been performing on an almost nightly basis at permiere venues around the city. Currently, Frank is the bass player with Kimbra, Saxaphonist Jessy J, and his Alternative/Soul group The Endangered.

Daniel Lape is a Los Angeles based musician, music director, and composor. The varying acts he performs with, allows him to showcase his professional level abilities he has acquired from years of intesive study and real world application. Expressive guitar playing, the knowhow to create stadium-filling backing tracks, extensive DAW knowledge, arranging, songwriting, and keyboard synthesis, allows him to work within: Rock, Pop, R&B, Electro, Soul, Dance, Jazz, and other popular music styles. Whether it be as the music director or side-musician.

Along with performance, Daniel is also the owner and founder of Audio Village. Audio Village is a boutique production music library specializing in music for theatrical and television advertising. Although only in business for a short time, Audio Village's music is continuously used by major studios, such as: Warner Brothers, Fox, and Paramount.

Born in Manhattan to musical parents, Iajhi has had music around him all of his life. Following in the footsteps of his father (Ivan Hampden) who has toured with Luther Vandross since 1987. He began playing drums at the age of ten in a North Carolina church behind his mother who served as the musical director for the church, while taking gigs in the area at 16, as soon as he was able to drive. Iajhi enrolled at North Carolina Central University two years later in 1997, and under the direction of Dr. Ira Wiggins began the journey into jazz studies. While at N.C.C.U. as a part of the jazz studies program he was privileged to perform at the Montreaux and Vienne jazz festivals in Europe, the White House on two occasions, and also shared stages with Stanley Turntine, Slide Hampton, Frank Foster, Jimmy Heath, Terrell Stafford, Nicholas Payton, and many others.

In 2005, Iajhi completed a Graduate Assistantship to Ronald Carter (sax) At Northern Illinois University as a Liberace scholar. Professor Carter has taught many of the current young “lions” in the music scene today including drummers Montez Coleman (Rufus Reid), and Terrion Gully (Christian McBride), and has a working relationship with Wynton Marsalis and the Jazz at Lincoln Center program as creative administrator. While at N.I.U., Iajhi was privileged to tour with the NIU Jazz Ensemble working alongside guest artists such as Donald Harrison, Christian Scott, Eddie Henderson, Dennis Mackrel and Red Holloway.

Iajhi plans to continue on the journey of life called music and letting the journey take him wherever it may.